Can I drive with a cracked windshield in New York?

Cracks of 11 inches or longer are not allowed in area cleared by windshield wipers.

It is up to each individual police officer to determine if your view of the road is impaired or obstructed. It is recommended to repair cracks or replace windshields immediately.

Your vehicle will not pass inspection in New York if: 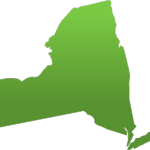 New York is a state in the Northeastern region of the United States. New York is the 27th-most extensive, the 3rd-most populous, and the 7th-most densely populated of the 50 United States. New York is bordered by New Jersey and Pennsylvania to the south, and by Connecticut, Massachusetts and Vermont to the east. The state has a maritime border with Rhode Island east of Long Island, as well as an international border with the Canadian provinces of Ontario to the west and north, and Quebec to the north. The state of New York is often referred to as New York State to distinguish it from New York City.

Have questions about cracked windshield or other traffic laws in New York?

Avoid high legal fees and ask local New York lawyers from the comfort of your home! Traffic law experts are on call 24/7 ready to answer and explain any question you have.